VPN vs TOR, Pros and Cons

If you are looking for a secured way to surf the web anonymously, there are quite a few options available to you. The most common and reliable methods are probably the Tor network (The Onion Router), and VPN services (Virtual Private Network).

VPN and Tor services are often compared side by side, as VPN vs TOR, they are often confused and treated as competitors. While in reality, one of them is not necessarily better than the other. VPN and Tor are just different. While a VPN may be more appropriate in one context, Tor may be more appropriate in another. This guide will compare Tor and VPN to help you decide when to use each. 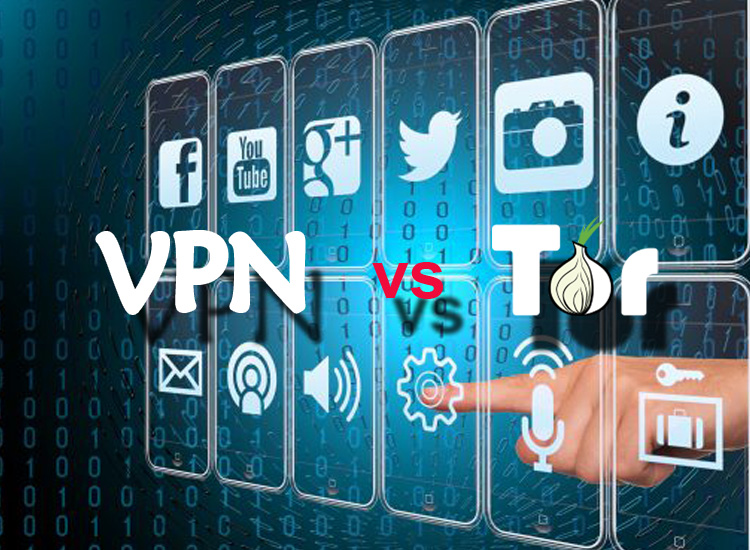 Both allow you to browse anonymously and hide your IP address (and hide your location too) so that no one even the hackers can track your online activities. In addition, these two services allow you to bypass internet censorship and Geo-restrictions so as to give you access to any website or web service that is otherwise blocked by your internet service provider, or Geo-restricted by the service itself.

How TOR works
Tor, which is known as “The Onion Router”, is an anonymization service. Tor makes it difficult for anyone to track your internet activity and is designed to protect your online privacy by routing your internet traffic through the Tor network to randomly selected relays (run by volunteers) that are scattered around the world. The software is free to install and use.

All traffic that passes through these relays within the Tor network is encrypted and re-encrypted multiple times until it reaches the egress node (the last computer in the path of the Tor network that you used).

At the egress node, the last layer of encryption is decrypted and data is sent to the destination without revealing the identity of the sender. You can also learn about tor email providers here.

According to the Tor website, “Tor helps reduce the risk of traffic analysis by spreading your transactions across multiple locations on the Internet so that no point can link you to your destination.” The idea is very much similar to using a hard-to-follow route to get rid of and protect someone who is following you. Instead of taking a direct route from source to destination, data packets on the network follow a random path through multiple relays that cover your tracks so that no observer can tell where the data is coming from or where the data is going. “

Each of the nodes can only see the data and the IP address of the previous node and the next node. Therefore, no one can find the full path between your computer and the site you are connecting to.

In addition, each completed path is valid for only 10 minutes, and then new random paths are generated.

If you connect to another site at a later time, the Tor client will select a new random path.

This protects your ISP (Internet Service Provider) or anyone else can know which sites you are browsing. And the websites you visit to know your IP address – They will only see the IP address of the computer at the exit node.

Tor’s strength lies in the number of volunteer relays. The more volunteers there are, the more secure the whole Tor network becomes.

How does a VPN work?
A VPN service protects your privacy by masking your IP address and encrypting your internet traffic. When you connect to a VPN server, that VPN server will act as a proxy to connect to your desired website.

When you connect through the VPN server, the websites you visit only see the IP address of that VPN server, not yours. In addition, all of your internet traffic is encrypted. Therefore, no one, including hackers and your ISP, can snoop around your web activity or steal your private information.

How does a VPN work

All your ISP or hacker sees is that your connection is encrypted. VPNs are generally not blocked by ISPs as they are commonly used by remote workers so that they can connect to their corporate networks.

Pros and cons of using Tor vs VPN
As you can see, VPNs or Tor, both can be used to bypass Internet censorship and protect your privacy. You can also use them to overcome content Geo-restriction by connecting to a node or server that is at a location that has unrestricted access to content from the site of your choice.

VPN or Tor, both have advantages and disadvantages…

The advantages of TOR:
No one can link the sites you visit to your IP address.
Since the network is distributed, it is extremely difficult for a government or organization to shut it down or force anyone to disclose your private information.

The disadvantages of TOR:
It is very slow – because your data travels through a number of relays. Therefore, it is not recommended for browsing or broadcasting Geo-restricted video content.

Anonymity not security, Tor does not offer secure communications. The encryption is used only to ensure anonymity between the nodes, your data is not encrypted otherwise. As the traffic at the output node is in the clear, anyone (who can be the police, the government, or a hacker) who controls the exit node can see your internet traffic… there is no point in being anonymous if you are going to send information that can be used to identify you. Anyone can install a Tor exit node and there is nothing to prevent the owner from spying on users, so if you are sending something sensitive, be sure to use secure websites (HTTPS).

The advantages of VPN:
The connection speed is definitely much faster compared to Tor because there is only the secured VPN server which stands between your computer and the website you are visiting.

A VPN offers better security and privacy than Tor.

A VPN encrypts all your traffic and protects you when you use public WIFI hotspots.

The disadvantages of VPN:
A good VPN service costs money, but it’s not very expensive (~ $ 50-70 / year). There are also free VPN services out there, but those are slow and bombard you with advertising.

Some VPN service providers keep logs of your activity, that’s why you need to make sure the VPN you are using is nologs, for example, I use and recommend Rocket VPN. You can also learn the best VPN for darknet and dark web sites.

Conclusion
If you just want to surf the web anonymously, then Tor may be enough. But if you want better privacy protection, speed, and stronger security against hackers, identity thieves, and malware, a VPN service is probably a better option.